On festival day, watch and hear JoD’anna at

in a special performance for our 2020 online festival! 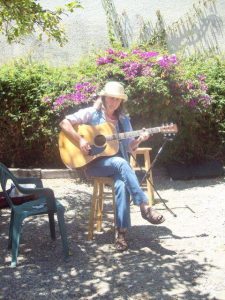 Jo D’Anna is originally from Palo Alto, CA, where she took her first guitar lessons with Jerry Garcia in the back of Dana Morgan Music Store during the Summer of ’63. She also lived in the same Menlo Park neighborhood as Ken Kesey’s Merry Pranksters, which just happened to be down the road from the Grateful Dead’s early home known as “The Chateau”. The San Francisco psychedelic counter-culture which surrounded her early years is what shaped Jo D’Anna’s songwriting later on (although her music is actually more reminiscent of the Laurel Canyon songwriters of the late 60’s/early 70’s). After relocating to West Marin In 1990 (where she still resides), Jo started writing songs seriously and won numerous awards for “Best Song” and “Best Performance” in various Bay Area showcase competitions hosted by West Coast Songwriters Association. Since 1993, Jo has performed all over the Greater Bay Area–preferring the listening venues of coffee-house, cafes, folk stages at local music festivals, house concerts and the like. She has also had featured performances onstage at the Freight & Salvage in Berkeley, and has appeared in numerous songwriter showcase spots in folk clubs in San Francisco. She has independently released 2 CD’s in 1995 and 2007, and her latest EP, “Two Roads”, was released in October 2018. Jo D’Anna is a Verified Artist on Spotify and iTunes, where you can listen to her latest 2 album releases. Her current project is a (gradual) videorecording of all her original songs which will be posted on her YouTube Channel. Other sites where you can find out more about Jo D’Anna and follow her gigs and/or music projects is via her website (www.jodanna.com), which is currently under reconstruction, but will be available again soon; or via her Facebook Music Page: @MusoPhile.