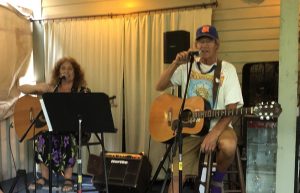 Hali Hammer is an award-winning singer-songwriter who writes and performs an eclectic mix of music. Her influences are diverse, and the highlight is her crystal-clear singing. She has several YouTube videos, five CDs and has published a novel, Keep the Motor Running: A Hippie Escapade.  She has played for peace and political causes for over five decades and is a founding member of Occupella.

Randy Berge began his musical journeys with R&B and jazz-influenced rock and jam-bands in the 70s & 80s. He first took up acoustic music in the early 80s in the heyday of La Val’s Subterranean in Berkeley. He’s been performing and recording regularly with Hali Hammer since 1999 and is working on a forthcoming CD of original music.