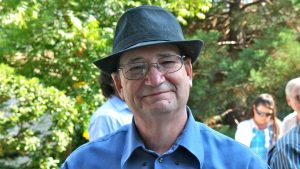 Danny Hirsch grew up in the San Fernando valley in the 1950s, and has been playing guitar since the  age of 7. His interest was inspired by a Pete Seeger community concert, where he was fascinated by Pete’s banjo playing. When he asked his parents if he could banjo, he was told they didn’t own a banjo, but could easily pick up a guitar from one of the many friends had brought back from Tijuana, Mexico. His parents might have implied that, if he stuck with guitar, later they would consider a banjo.  He never did get that banjo…though the guitar has been a wonderful companion these many years.  Early lessons were based on folk singers popular at the time, including The Weavers, Kingston Trio, Odette, Joan Baez, Harry Belafonte, Theodore Bikel, among many others. His very first album he owned, a birthday gift from a favorite aunt and uncle, was Peter Paul and Mary’s first album. They have been his very favorite group ever since. Other early favorites were humorous songs by Alan Sherman and, later Tom Lehrer.